A luxury four bedroom villa that is located on the oceanfront in the lush surroundings of the San San, Port Antonio. A special place that was created for friends and family, for relaxation & laughs and for memories that will last a lifetime.

Come and visit us in Port Antonio to find out why Errol Flynn described this destination as ‘more beautiful than any woman he’d ever seen’ and Noel Coward, referred to Port Antonio as ‘heaven on earth’ a description echoed by subsequent visitors who have found this ‘Island Eden’ to be the ultimate vacation destination. 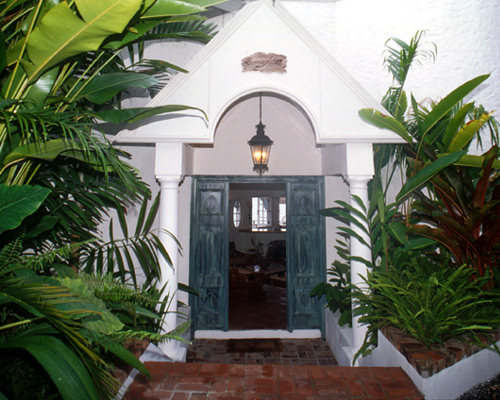 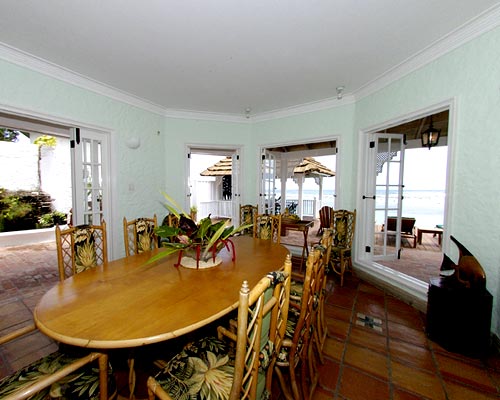 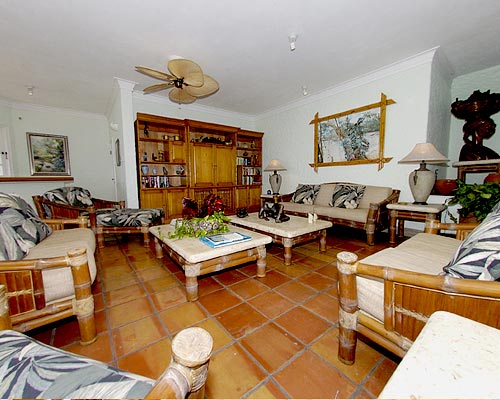 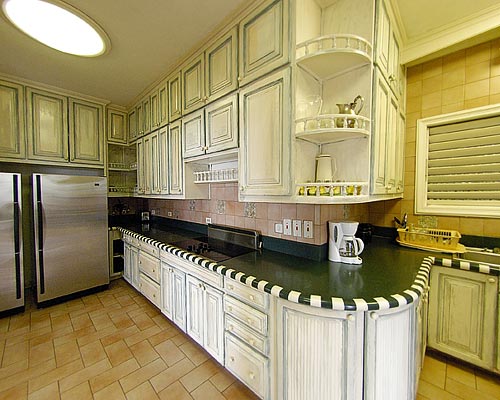 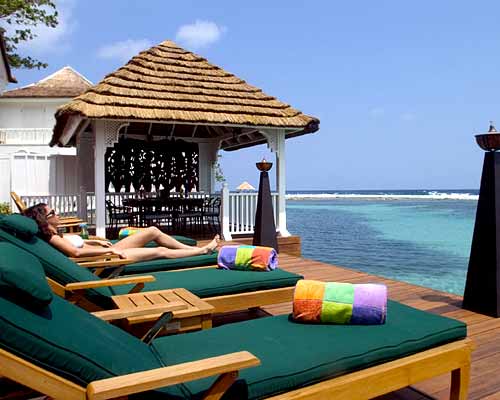 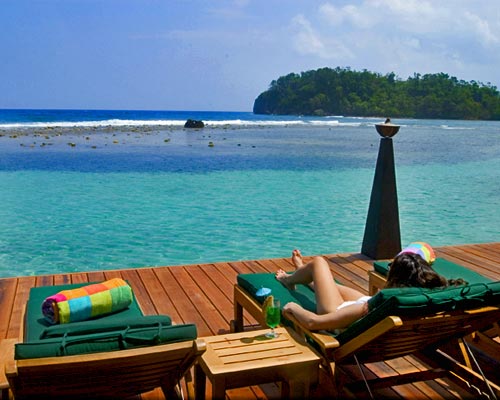 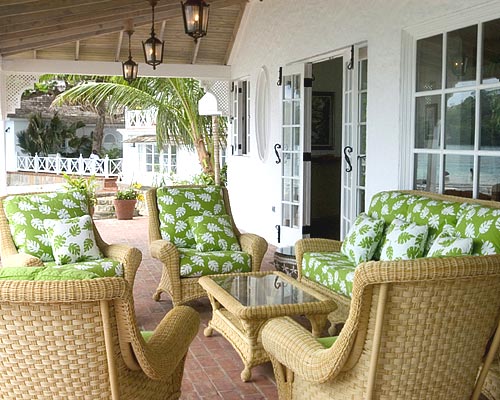 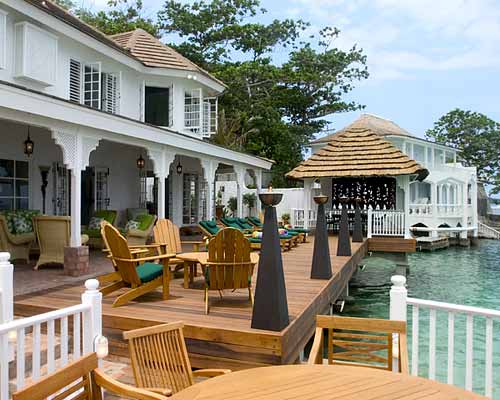 The Villa has four well-appointed bedrooms. Two bedrooms have king bedding, one has queen bedding and the other has two twin beds. All rooms have cable TV, air conditioning, fans and private bath. We provide fresh linen daily. 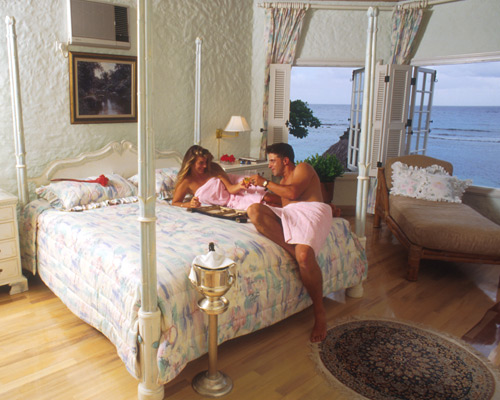 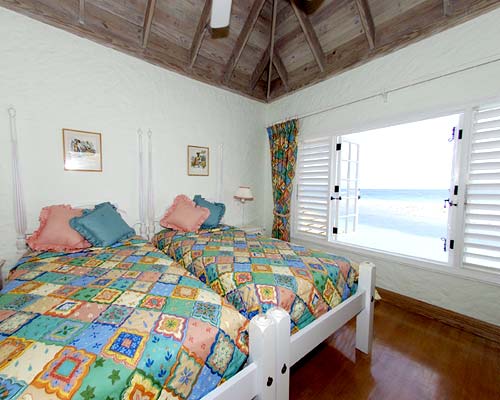 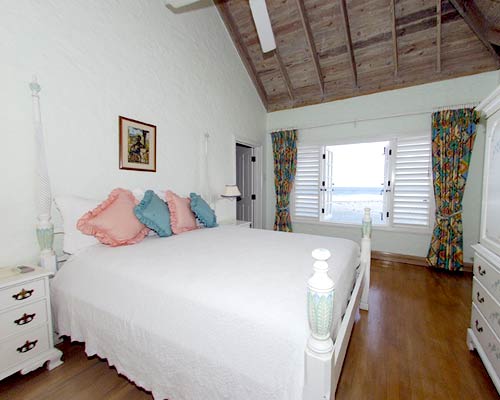 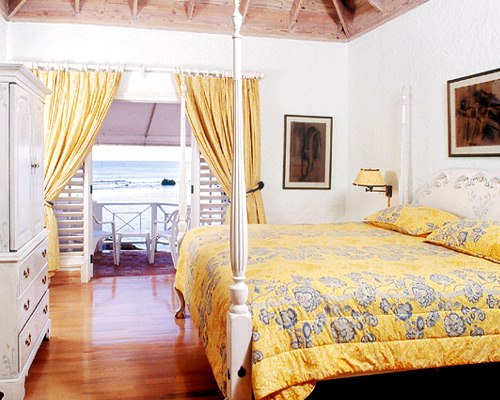 Need a Trip to Paradise?

Only a few minutes walk along a lush tree covered road you will discover the Blue Lagoon. Nature’s palette on view. The colours of the lagoon hypnotize viewers with its constantly changing shades of blue due to the intermingling of sun and shade. How deep is the Blue Lagoon? They say that Jacques Cousteau went as deep as 200 feet and still found no bottom.

At dusk or by day, beauty never fades. The Blue Lagoon at dusk, evokes calm and peacefulness. Enjoy rum punch on the shaded verandah or watch the colours of the lagoon change with the movement of the sun. The Blue Lagoon is over 178ft deep and is Port Antonio’s most famous attraction. Join us for candlelight dinners and soft music or simply sit and relax on the terrace.

In Reich Falls, one of Port Antonio’s best attractions, one can find solace and ultimate comfort in the cool, clear waters under the watchful gaze of the Blue Mountains. The falls are famous for their place in the love scene in the 1980 Tom Cruise movie ‘Cocktails’.

The spot is exquisitely peaceful as it is surrounded by rain forest and a series of waterfalls that tumble over limestone rocks as they lead from one pool to another. There are three caves under the falls where lovers often go for ‘quiet time’. One cave, the Mandingo Cave has a whirlpool. Surrounded by the quiet community of Reich, the journey begins as soon as you enter Port Antonio. Greeted by the cool atmosphere and the cleanest smells you’ll ever breathe, the attraction begins long before you’ve driven the length of the winding roads that lead to paradise.

At the edge of paradise, near the end of a small promontory accessed by a lonely road leading from Port Antonio, lie the elegant and forlorn ruins of a once-majestic home, dubbed “Folly” by the residents of the seaside town. Built at the turn of the 20th century as a gift to impress the woman he loved, the ostentatious mansion was erected by an American businessman known now only by the name of Mitchell. The two-story, sixty-room house, styled after a Roman villa, in its day must have been one of the most elaborate and futuristic homes on the north coast; it had its own power station, independent water reservoir, and private menagerie of exotic animals. Mitchell, it is said, rarely socialized with residents of Port Antonio, and had no reason to; all his supplies arrived by boat and the house was completely self-sustainable.

According to local legend, Mitchell’s love never came to Jamaica, and his failure in affairs of the heart were compounded by his folly in constructing the seaside retreat. Apparently, during the hasty construction, the builders mixed the concrete with salt water, and soon the structure began to crumble as the steel support beams reacted with the minerals in the water and began to disintegrate. As his plans to live happily ever after crumbled, so did the house, and after some time attempts to repair it proved futile and the mansion became uninhabitable. Today, all that’s left of the rich man’s folly are ruins, which can be seen from the road. The house itself has been condemned and declared unsafe, but behind the house is a bathing beach with a strong current, usually deserted but occasionally used by local children. The residents of Port Antonio also use the land of the estate. The front lawns have been converted into a cricket pitch where on a Sunday afternoon local leagues can be see decked out in full white for hotly contested weekly afternoon matches. Folly, with its sad yet amusing tale of unrequited love, is a truly romantic place for a picnic. Set between the seemingly endless ocean and the graceful port town, the ruins hold their own presence, evoking illusions of grandeur from a bygone era.

While in Port Antonio you can laze the day away on a bamboo raft as it drifts down a quiet Jamaican river? On the two-person raft, you can get cozy with a loved one or kick back with a friend, surrounded by beautiful, tropical scenery. By the end of your ride you’ll have left all your cares somewhere upstream! Once on the calm river, you glide for miles through Jamaica’s lush interior. The ride is always peaceful, and set to your pace. If you like, you can slip off your raft into cool river pools or stop and sample fresh fruits handpicked from nearby trees. As you drift downstream, your raft captain may tell you interesting tidbits about the history of rafting and the surrounding community. Few things in this world are as relaxing as traveling down a tranquil river on a bamboo raft. Seated comfortably on your wooden bench, you’ll enjoy views of verdant riverbanks, while soothing river sounds rise from the stream’s surface. For this experience and so much more, take a rafting trip down Rio Grande River.

Jerk cooking is an authentic Jamaican way to cook chicken, pork, seafood or beef over a fire pit or on a barbecue grill. A special seasoning consisting of a highly spiced combination of Scallions, onions, thyme, Jamaican pimento (allspice), cinnamon, nutmeg, peppers and salt are combined to create the unique flavour known as “Jerk.” Jerk cooking dates back to the middle of the seventeenth century and it was practices in an area called Boston, which is just a short trip from Bonne Amie Villa.

The Seven Hills of Athenry has impressive caves where Arawaks lived before Columbus. A knowledgeable guide will escort you through the caves. Artifacts such as clay pottery crocodile teeth and jewelry are on view in the caves. The type of rock formation found throughout these hills are coral and limestone. There are very good stalactite and stalagmite formations throughout the caves. The cave itself is estimated to be 1 1/2 millions years of age…older than the island itself. Indicating that it’s formation began before the island rose from the sea.

Northern Jamaican waters are world renowned for their game fish, including dolphin fish (mahimahi), wahoo, blue and white marlin, sailfish, tarpon, barracuda, and bonito. The Jamaica International Fishing Tournament and Jamaica International Blue Marlin Team Tournaments run concurrently at Port Antonio every September or October. Most major hotels from Port Antonio to Montego Bay have deep-sea-fishing facilities, and there are many charter boats.

If you are a diver then Port Antonio is certainly a destination, which you will enjoy as the Port Antonio coastline is regarded as one of the best that Jamaica has to offer.

Need a Trip to Paradise?